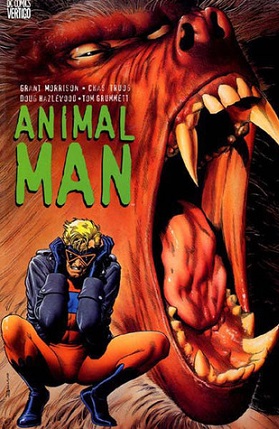 I start in the USA, in 1988, when the then quasi-unknown Grant Morrison launches a series starring a character less than third line, and even with a less than mediocre artist. Maybe it was Brian Bolland covers that made the difference, the truth is that we were not so few who bought Animal Man from the beginning ... and the rest was the work of word of mouth. Clearly, this was the series to recommend, until by the time the Scot leaves this collection, it was already a hit, or at least a cult series.

Now I have to rediscover these stories in TPB format and it's comforting to see how well they aged for 30 years. The drawing of Chas Truog is still quite insipid, although without too gross mistakes. The contrast is very strong with the covers of Bolland, even with the episode drawn by Tom Grummett, the ninth and last of this first TPB. But hey, it was the '80s, it was a title that DC did not play too many chips, and I do not know if these scripts -with the degree of development that one perceives- need a more spectacular draftsman, more virtuous or higher display.
Morrison's work is really impeccable. In the first four numbers, he presents from scratch a character that nobody had on the radar, gives him a nice cast of support characters, gives him a motivation and adds another on the end of the initial arc. Even reintroduces another ancient hero, also in disuse, that was B'wana Beast. If it all ended there, it was an excellent four-episode miniseries. But it did not end, and Morrison played his ace of spades: The Coyote Gospel, heartbreaking tribute to the cartoons of Coyote and the Road Runner, and also the first ride with an element that will be central in this series: the different levels of reality . An absolutely shocking story, which at the time left me perplexed, speechless, stupefied.

Then come four more basically self-concluding episodes (one of them quite hooked with Invasion!). Morrison demonstrates once again that 22 pages are more than enough to tell a good story, and starts by stringing together a couple of sub-plots and integrate Buddy Baker a little more to the DC Universe.
Between one thing and another, with these nine episodes Grant Morrison won the loyalty of a lot of readers who said "this kid I follow everywhere" and Animal Man went from being a dark and bizarre reference to be a character that appeared in all the talks among the comic readers of that time.

All images courtesy of Vertigo