Grant Morrison master class that would get out of oblivion Animal Man, at least for a while!

Animal Man is Bernhard "Buddy" Baker. Thanks to the explosion of an alien ship, he gets superpowers that allows him to adopt the qualities of any animal that is around. In addition, he is ecologist and vegetarian.

The character was created by Dave Wood and Carmine Infantino. It’s first appearance was in the magazine Strange Adventures in September of 1965. It never got to enjoy of great popularity, which is the main reason why it became a clear bet for the relaunching of classic characters that DC Comics undertook in the 80s. The renovation was carried out for the most part by British screenwriters (Moore's Swamp Thing, Gaiman's The Sandman or Milligan's Shade).

Grant Morrison would get Animal Man out of oblivion. The fortuitous fact that Morrison as a boy had crossed with one of the few comics of this character, made it possible that many years later, in 1988, Morrison along the penciller Chas Truog and inker Doug Hazlewood would give new life to Animal Man.

Between September of 1988 and August of 1990, Morrison gave a master class of adult and intelligent comic, with average cartoonists (Chas Truog and Doug Hazlewood), under the amazing covers of Brian Bolland. 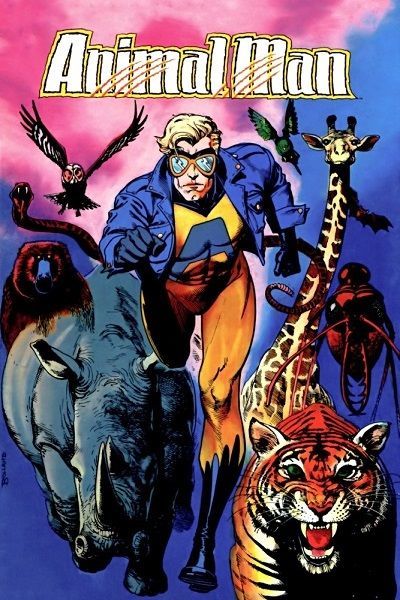 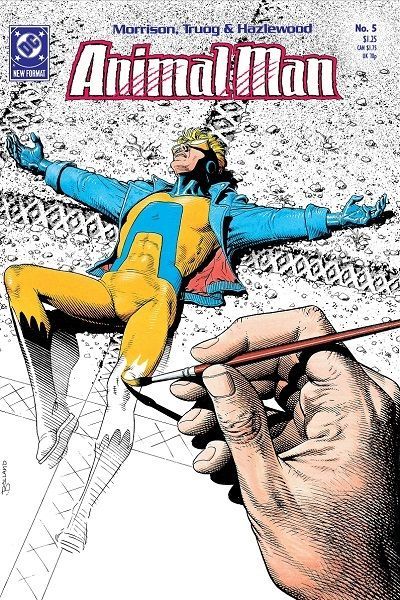 Morrison develops 26 unforgettable issues of Animal Man with an adult tone, renovating, breaking, with the coyote that crosses realities, the ecological point of view, the revision of its origin, the drugs that allow the character to see the readers and his own appearance that breaks the rules of comics industry. The number # 5 of the collection, The Coyote Gospel, would become an instant myth of the Ninth Art, nominated to the Eisner of 1989 in the category of best single number.

Morrison, who left the series to work in Doom Patrol, would be replaced by another English scriptwriter, Peter Milligan. Surreal characters, quantum physics and techniques such as pasting paragraphs written by William Burroughs populate the six numbers in which Milligan was involved (from 27 to 32). Milligan would be replaced by Tom Veitch. With the novelty that the drawings would be in charge of Steve Dillon. The cartoonist who would later work on Preacher.

Veitch tried to combine the madness of his predecessors with a more traditional story-telling, used characters from the DCU, tried to explain a little more about the powers of Buddy Baker, but retired at number 50 without having achieved a memorable or important story. But an interesting character would survive: Maxine, the daughter of Animal Man, who also has powers.

After Veitch, Jamie Delano would arrive, who had the longest stage of all, becoming Animal Man in a kind of animal avatar and eliminating the superhero elements to focus the adventures in terror of totemic and mystical roots.

Now with Buddy as the "elemental of the animal" and his family in leading roles, Animal Man creates the Life Power Church and explores his role as God of the Animal.

It should be noted that Animal Man was not part of the Vertigo inprint, only in number 57 would become part of the Vertigo line. On an artistic level, No. 63 marks the farewell of the series cover artist, Brian Bolland. Delano at No. 79, kills Buddy Baker and leaves the title. 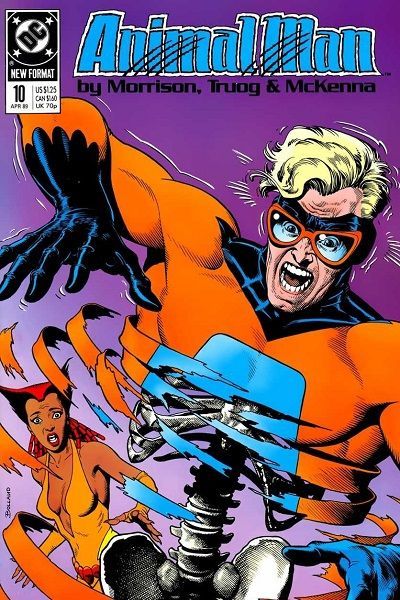 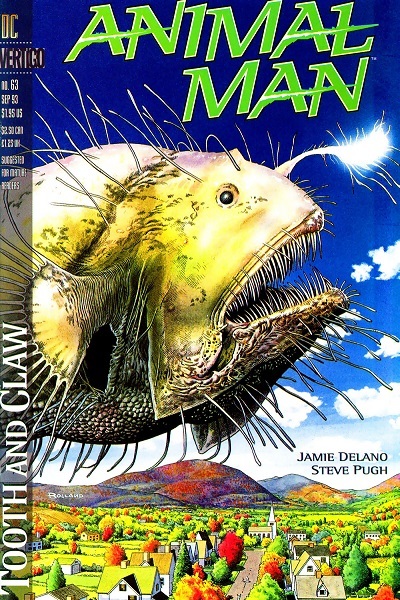 The next screenwriter to take on the mantle of Animal Man would be Jerry Prosser. The sales began to fall to it’s cancellation in the number # 89.

Jeff Lemire and Travel Foreman would be responsible for the re-launch of Animal Man in 2011 framed within the New 52. This new series would last only 29 numbers.

The reality is that the best part of Animal Man is outside the logo of Vertigo, but it is worth reviewing this minor character that Morrison would elevate in only the first 5 numbers.

I hope this little introduction will send you straight to your favourite comic book shop to meet Animal Man !