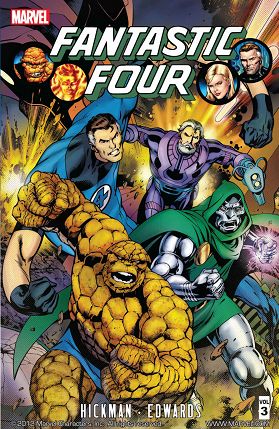 This TPB collects Fantastic Four #579-582. Truth to be told, is puzzling, because nothing happens of what you would think it would happen after reading the previous volume.

In the Vol.2 Hickman toyed with the idea of a war between the four cities, now he plays around with the collapse of the different alternative realities. Nathaniel Richards (the father of Reed and protagonist of the magnificent SHIELD) is the first character to experience the end of the multiple realities and that ends in a two episodes story with a very young Reed and his friends from school, Ben Grimm and Victor Von Doom

The other episodes take place practically without a punch. In the first episode, the important thing are the dialogues of Reed, in the second there is a very minor adventure starring Johnny and the last one is an advance of what can happen, starring a grown-up version of Franklin and Val.

Another thing to consider in this volume is that is completely drawn by Neil Edwards, in replacement of Dale Eaglesham.  I believe this is a poor work of Neil Edwards, that doesn’t reflect his overall quality as an artist. If you look at the faces, you would see that it lacks emotions;and transmitting emotions in the faces of Reed and the kids is very important. Especially when you have a volume that doesn’t have much action.

It is very clear that Hickman has plenty of ideas to detonate huge sagas. This stage of Fantastic Four has a vast and complex cast, we foresee that very shocking things are about to happen but up to now we have only seen a preface.  The feeling I got from this volume is that something huge is about to happen, let’s hope that volume 4 start unravelling all these promises.