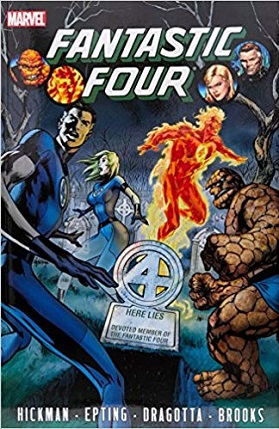 This volume collects  Fantastic Four  (1961) #583-588, orginally published between 2010 and 2011. We finally receive what we were expecting! At last!  All the seeds Hickman has sown thus far come to fruition.

First,  Reed, the Silver Surfer and Galactus have a major problem in a planet called Nu-World. As always, when a good screenwriter involves Galactus in a saga, a complex moral dilemma is at stake, a challenge that goes beyond the cosmic action.

Sue, meanwhile, gets involved in a problem between the Atlanteans who respond to Namor, the amphibious prince eternally in love with the Invisible Woman, and an ancestral tribe, who inhabited the ocean depths long before the Atlanteans.

The third story takes us to the Baxter building , where Ben who has become human again, Johnny and the FF boys, will have to endure nothing less than an invasion of the Negative Zone. This will end very badly.

The first episode is very strange. The Silver Surfer discovers something that happened with Galactus during Mark Millar’s run. We see Valeria Richards show her super-intelligence in glorious sequences in which she interacts with Dr. Doom, surely to activate a sub-plot that we will see in the future . The dialogues of this volume are magnificent (except in the mute epilogue, obviously), but of course, having so many sequences with Galactus and the Surfer, and so many sequences with the dignitaries of the different underwater civilizations, a ceremonious, solemn phase is imposed. Luckily Ben, Johnny and the boys add some warm.  The coldness becomes emotion in the silent epilogue, the final story, the shortest, with Spider-Man and Franklin, is so emotional and hits so hard that I almost cried.

Regarding the art, this volume is drawn by Steve Epting who is above what we had seen with Edwards in the previous volume. There are very uneven pages, where Epting  it would appear to be in a hurry, or without desire. We also have really impressive pages, where you can see all the work and dedication that put in each image. With enough time and motivation Epting is a glorious artist.   The epilogue is drawn by Nick Dragotta . He has a rare style, similar to Jack Kirby’s in a way. It is an interesting work , because it is all narrated without texts, in very well planned silent sequences, in which script and drawing are highly complemented. The epilogue of the epilogue, 8 pages, are drawn by Mark Brooks with a 90's WildStorm style.

Over all, this TPB delivers what we were expecting. We have Galactus, Dr. Doom, Namor and the Silver Surfer! The art is much better than last volume. I highly recommend it! If you have read so far and want this baby so badly, you can buy it here

Please take a look, in case you haven't already, to the review of the Volume 3.