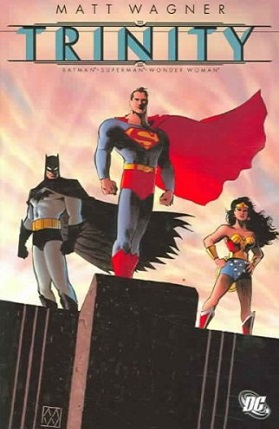 Trinity has a script and drawings by Matt Wagner, an old acquaintance of the public for renowned works of the likes of Mage, Grendel and Sandman: Mystery Theater. A great curriculum that makes us hope for the best considering that the protagonists are none other than the holy trinity of DC: Superman, Batman and WW.

Trinity was published in TPB in 2005. It consists of 208 pages, in which we have an introduction by Brad Meltzer (the writer of Identity Crisis), and several extras such as covers and sketchbook pages.

In the comic, Wagner tell us the first encounter between Wonder Woman, Superman and Batman, in order to face the threat of Artemis, Bizarro, and R'as Al Ghul in their plan to reshape the world. Three villains, three heroes and possible global destruction. The adventure is served. The story may sound worn-out, but let's think it was originally published in 2003.

Wagner offers here a solid and uninterrupted story, credible dialogues and a drawing that fits perfectly to what he wants to tell, always within his personal style.

The script is reader-friendly. The best thing about Wagner's script are the details in the characterization, showing us that he knows perfectly the essence of Clark, Bruce and Diana. This allows him to make them interact in a credible, harmonic, natural way.  In the story there are cameos of Robin, Lois Lane, Queen Hippolyta and Aquaman, but the most important thing, is Wagner's great handling of the three main characters.

As for the graphic section, Wagner, shows us his well-known narrative display tied to his characteristic visual style. The characters are always majestic, he draws synthetic lines and very expressive characters, with a great eye of the gestural language of each character.

Dave Stewart puts his superb palette at the service of Wagner, his characters and their surroundings (Gotham, Metropolis, Themyscira) and creates the propitious and necessary climate to fully enjoy this story.

If you are a fan of the three most emblematic heroes of DC, give it a chance . The script is fine and there are many excellent moments.